A tradition previously upheld by Lodge St John Corstorphine historically, had been revived in 2011 with the Lodge joining in many other local community figures in laying a wreath.

Once again Lodge St John Corstorphine No.788 has been pround to not only attend the service, but to provide teas, coffe, soups and home baking to visitors paying their respects.

Lodge St John Corstorphine were joined by local services from the likes of The British Armed Forces, The British Legion, Police Scotland, The Royal Navy and the Rotary club.

Flying the flag once again for Lodge St John Corstorphine No.788 was P.M. Bro. Calum Stewart who carried out the Installation of R.W.M. Bro. James Center at Lodge Breadalbane No.657 on Saturday 21st November.

This Installation marks the beginning of Bro. James Center’s fourth term as Master of the Lodge and P.M. Bro. Calum Stewart has had the pleasure of being Installing Master at each of these ceremonies. 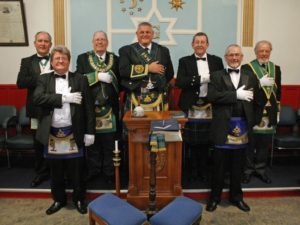 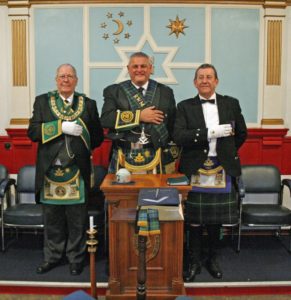 In by gone days, Lodge St John Corstorphine used to have the privelage of laying a wreath at the War Memorial outside Corstorphine Parish Church.

We revived this tradition in 2011 and are pleased to say we have attended all since and plan to make it an annual occasion.

The service itself is going from strength to strength with some 35 wreaths being laid down this year from the likes of The Royal British Legion, British Armed Forces, Royal Navy, Police Scotland, The Rorary Club as well as Lodge St John Corstorphine No.788.

The service was once again headed by Rev Moira McDonald who is the Minister of Corstorphine Old Parish Church.

Afterwards Tea’s, Coffee and Cakes were provided by Lodge St John Corstorphine to any guests who wished to join us. Many thanks go to Karen and Emma Logan for their superb baking skills and to Corstorphine Bowling Club for allowing us to use their premises on the day.

Congratulations to Lodge Thistle West Calder No.270 and to all the Reigning Masters in the Province of Midlothian on carrying out a First Degree in the premises of Lodge Thistle No.270.

All office positions were filled by existing Masters throughout the province.

Great to get everyone together and great organisation from Lodge Thistle!

Each year a Province within the local area is asked to host a family fun day and fund raising event for the Sir James McKay House in Edinburgh.

Sir James McKay House is one of two Care Homes owned and administered by Grand Lodge of Scotland and can be found at 18 Ravelston Park in Edinburgh.

This year the Province of Midlothian have been asked to host the fund day and all Lodges within the Province have either made a commitment to run a stall, tombolo or other fun event, or have made a charitable donation towards the day.

There will even be the sound – which is very familiar at Sir James McKay House – of Motorbikes as The Widows Sons will be there on the day with their Harley Davidson display.


This fundraising is important to the residents at Sir James McKay House as any money raised goes directly to the house and can be used as required – perhaps for fun days out and trips away.

The Province of Midlothian would like to welcome all to the family fun day, hope you are able to support this venture and have a great day.

Some of the Brethren will be interested to know that Freemason’s Hall in George Street, Edinburgh will be having an Open Day on Saurday 1st November 2014.

This special Saturday opening happens only twice per year and gives members the opportunity who normally work during the week, to visit this magnificent building.

More details can be found at the Grand Lodge of Scotland Web Site.

Lodge Coupar O’ Fife No.19 are visiting Lodge St John Corstorhine No.788 on Saturday 30th August 2014 for a special visit where they will be carrying out a 1st Degree.

Please note that this has previously been advertised as commencing at 2pm – but will actually be tyling at 4pm at the Caledonian No.392 premises at Roseburn in Edinburgh.  We understand that the bar will be open earlier to accommodate thirsty travellers so feel free to join us at anytime.

We wish R.W.M. Kevin Thomson all the best on the evening and look forward to an interesting degree as it is quite different to the degree normally carried out by No.788.

The finale of the Cold Water Challenge was held at Newbattle St Mary’s on Sunday 10th August 2014.The team at Newbattle had arranged a BBQ day and entertainment at night from Bro. Les Duff, Bro. Rab Hayes, Michelle Wilson, Bro. Chris Syme and Bro. George Veal.

Congratulations to Bro. Ian Wilson and his dog on winning the Challenge for the boys and Christine Carmichael (No.10 Alan’s Good Lady) for the girls.

Well done also to Brian and Alisa Clements for organising and hosting the event and Alan Carmichael for his culinary skills at the BBQ Grill.

… and thanks to Murrie Thomson for the photos.

It is our very sad duty to report the Passing of Past Master Bro. W. Grant Marshall.

Bro. Grant can be seen in this picture after he was awarded his 50 year Diploma in 2010 by Bro Calum Stewart P.M.  He always attended meetings regularly and joined the team of special visits whenever he could.

Bro. W. Grant Marshall P.M. will be sadly missed by all at Lodge St John
Corstorphine No.788.

There will be a service at Mortonhall Crematorium on Friday 13th June 2014 at 10am where all will be welcome to pay their last respects.

Bro. George N. Bremner P.M. was awarded his 50 year diploma by Provinical Depute Grand Master Bro. Thomas Constable Smith on 27th February 2014 – which was actually 50 years to the day since Bro. George was initiated into the Craft in 1964.

Despite having already given 50 years service to the Lodge, Bro. George still carries out the duties of Director of Ceremonies and brings his own personality and sense of humour to the fore.

Interior of Lodge after Fire

In the interests of keeping everyone informed on the latest news of the after effects of the fire at Corstorphine – here are some pictures taken by our Substitute Master Bro. John Wilson.

With the recent fire damage of the building which housed Lodge St John Corstorphine, there have been many kind letters sent to us offering condolence, assistance and support.

The letter below has been sent by Brian Kerley, Provincial Grand Master of Midlothian Province.

It is fantastic to hear all the kind words of support from both within and outwith the Province.

Following on from the recent outbreak of fire at the Corstophine Public Hall Company which housed the Masonic Temple of Lodge St John No.788, we have now reached an agreement on our temporary meeting place.

Please read the e-mail from Secretary Derek Syme P.M. below for full details.

Following our AGM on the 24th Oct 13 and subsequent discussion with Lodge Caledonian No.392, we are satisfied that No.392 will serve us well as a temporary home while our own premises are renovated.

We will continue to tyle at 7.30pm on the 2nd and 4th Thursdays of the Month and we hope that members will support the Lodge during this extraordinary time.

I can assure you that the owners of our premises are committed to re-instating the building and that the user groups, which includes No.788 will be consulted on the shape of the new building.

There is therefore a strong possibility that we could end up with better, fit for purpose, accommodation than we had previously.

Our RWM Sean Cairns was able to gain access to the Lodge this morning and it would appear that most of our history has been spared with the obvious exception of the ceiling which is now on the floor.

On a personal note it was excellent to see so many Lodge brethren at the AGM including some that we have not seen for a number of years.

Brethren it is at times like this that we all have to rally round and assist whenever we can, to get back to what has been normality for the last 121 years.

I look forward to seeing you all on the 14th November for a second degree at: