It has once again been a pleasure to have the opportunity to lay a wreath at the Corstorphine Parish Church.

This year the honour of laying the wreath went to our oldest and much respected Past Master Bro. George Bremner P.M.

This has been a difficult year in all areas due to the Covid 19 Pandemic, but it’s great to see that despite the fact we are unable to hold meetings, Lodge St John Corstorphine No.788 has been able to keep up this tradition.

Following a fire at our premises at The Public Hall in Kirk Loan, Lodge St John Corstorphine have been carrying out their meetings within the premises of The Caledonian Lodge No.392 at Roseburn Gardens in Edinburgh.

Although we will always be grateful to The Caledonian Lodge for allowing us to carry out our meetings at Roseburn, the intention was always – when the time was right – to return to our premise in Kirk Loan.

Currently, the premises we previously occupied are still unavailable to us, however we have been offered the opportunity to secure meeting nights at the newly refurbished Astoria Centre owned by The Corstorphine Trust, located at 18 Kirk Loan, Edinburgh. EH12 7HD.

The Astoria Centre can be found by turning right into Kirk Loan from St John’s Road, and is on the right immediately after Winston’s Pub as per images below.

Due to limitations of availability, Lodge St John Corstorphine will now meet on a Tuesday instead of Thursday, beginning on Tuesday 27th February 2018. Please check the events section of this website to confirm when meetings are to take place.

It is always a pleasure to be offered the opportunity to lay a Poppy Wreath on behalf of an organisation at Corstorphine Parish Church and once again this honour has gone to Bro. Graeme Johnston as he represented the local Masonic Lodge in Corstorphine, Lodge St John Corstorphine No.788 as Master of the Lodge.

It is especially special to Lodge St John Corstorphine No.788 as we will soon be celebrating our 125th Year in Freemasonry, having been established on St Andrews Day on 30th November 1892.

Once again the Lodge St John Corstorphine were joined by local services from the likes of The British Armed Forces, The British Legion, Police Scotland, The Royal Navy and the Rotary club.

Once again Lodge St John Corstorphine were proud to be able to offer Refreshments and Home Baking to anyone paying their respects.

Big congratulations to all who took part in the Midlothian Province Reigning Masters Degree on Friday 29th September 2017 – and a special big thankyou to Lodge Rosslyn St Clair No.606 who hosted the event.

Honorary Membership for Bro. John Wilson P.M. at
The Portobello Lodge No.226

Congratulations go to Bro. John Wilson P.M. who received Honorary Membership at The Portobello Lodge No.226 on Thursday 21st September 2017.

Bro. John has been a regular visitor since joining the craft 10 years ago and it’s a great honour for both Brother John and Lodge St John Corstorphine No.788 on being bestowed this award.

It was credit to John that he was accompanied by so many of his Brethren from his Mother Lodge forming the Deputation headed by Right Worshipful Master Bro.Graeme Johnston.

Each year Lodge st John Corstorphine No.788 and Lodge Coupar O’ Fife No.19 get together to work a degree and enjoy harmony together.
This year it was the turn of Lodge Coupar to host the event and it has to be said the hospitality offered to Lodge 788 was tremendous.

Lodge 788 arrived with 17 Brethren in tow and carried out an excellent working of the second degree which was much appreciated by the Brethren assembled – including a visitor from Reykjavik in Iceland.

During Harmony everyone was treated to a fantacstic evening of sing song, local Fife folk tunes and a rendition of My Mother Lodge which was written by Rudyard Kipling.

Some well known faces at the Midlothian Province Reigning Master’s Dinner which was hosted by Lodge St John No. 112 in Musselburgh on Friday 28th July 2017.

It had been brought to our attention that one of our Brethren who had been been made a Master Mason in Lodge St John Corstorphine a number of years ago, was due to receive his 60 year diploma.

Below is an account of the events, written by our R.W.M. Bro. Graeme Johnston.

Our Brother Secretary received a letter from Grand Lodge to say that we had a Brother called Jim White amongst our number that was due a 60 year Diploma. To be fair, nobody had any memory of Jim but it turns out he had 66 years continuous service to the Scottish Craft after being Initiated in 788 in 1950.

Jim’s son called Jeff became a member at Dramatic & Arts 757, went on to be Master and Jim followed his son there. Once that Lodge become dormant both Father & Son became affiliate members at Lodge Roman Eagle No.160.

On 16th November 2016 P.M. Fraser Gaunt, P.M. Derek Syme and myself went along to Roman Eagle to see Jim receive his 60 year diploma from the PGM of the PGL of Edinburgh, Ewan Rutherford.

Ewan surprised us all by asking me come to the floor of the Lodge with himself and the RWM from Roman Eagle to be the one to actually hand Jim his 60 year Diploma as the current RWM of his Mother Lodge.

A rare treat indeed and a wonderful gesture from Bro. Ewan! 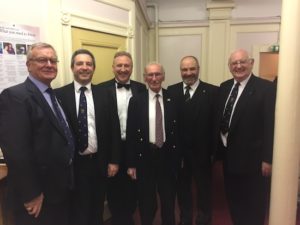 An excellent Harmony followed where Jim held the room recounting his days as a deep sea diver invthe Navy.

Both Bro. Jim White and Bro. Jeff White are looking forward to making a visit to Lodge St John Corstorphine some time, and rest assured they will receive a very warm welcome indeed.